Aerial Video Gives Your Project an Eye in the Sky 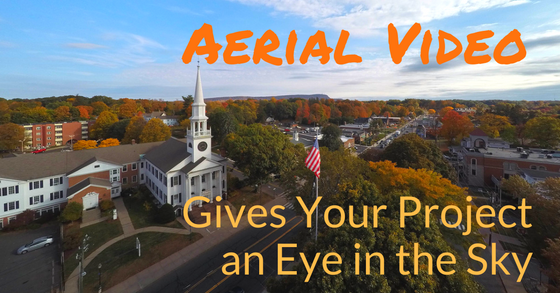 Aerial Video Gives Your Project an Eye in the Sky

Posted On December 1, 2016  By Jennifer Blessing Miceli  And has No Comment

Current work: Aerial Video Gives Your Project an Eye in the Sky

Sometimes a project is just too vast to show from the ground. But until recently, getting that eye in the sky to create an aerial video was prohibitively expensive. Now, advances in drone technology and the quality of video and photography these drones are able to capture has brought aerial video within reach for nearly every project.

Miceli Productions is proud to introduce you to our eye in the sky, a drone video and aerial photo service that allows us to create high-quality images for your next project. We offer drone video production in Hartford CT and surrounding areas.

The history of unmanned flight and aerial photography go nearly hand in hand, as both trace back to the mid-1800s, with both ideas driven in part by military uses. The first known use of unmanned aerial technology to be attempted in a military vein was on August 22, 1849, when Austria launched a series of unmanned balloons loaded with explosives toward Italy. Some balloons were able to reach their intended targets, but shifting winds blew others back behind the Austrian lines, causing tacticians to search for better ways to deliver unmanned mayhem.

The first known aerial photograph was made in 1858 by French photographer and balloonist Gaspar Felix Tournachon, known as “Nadar.” Tournachon had patented the idea of using aerial photography in map-making and surveying in 1855, but needed three years of experimentation to make his first successful photograph because the equipment of that time basically required him to take a full darkroom into the balloon basket.

The development of drone technology took off in the military after World War II, leading to advances that eventually brought the technology to a scale where it became commercially feasible for civilians and hobbyists.

Aerial photography, in the meantime, grew in popularity but was limited because of the cost. To create an aerial view meant using a stationary platform such as a tethered balloon or crane, or spending a good deal of money on hiring an airplane or helicopter.

Rapid technological advances brought the two branches together again in the 21st century with cameras small enough to be carried on the tiniest of drones, still capable of providing high-resolution photography and video that can be used for nearly any commercial purpose.

Miceli Productions is excited to bring this new service to our clients, adding a way to tell larger stories without commanding a larger budget. Already, we’ve tapped our drone technology to bring two governmental projects down to scale – our film for Watershed Geo solar installation at the Hartford, CT community landfill and the Southington, CT wastewater treatment plant referendum film. And we’ve been able to promote the Southington Farmer’s Market with an aerial video from the farm of one of the market’s vendors.

There’s no limit on how drone generated aerial videos can be used to promote your business or your event. Just imagine an aerial viewing the bicycle race your group sponsors; it could even be streamed live. Or how your outdoor festival might be viewed from the sky – the bright colors mingled with shifting masses of people, or zooming in on a band’s drummer, seeing it all from a view rarely seen. Or how your business is enhancing the environment through output of clean wastewater or by creating green spaces for wildlife.

Your aerial video can tell your story in a brand new way that will capture the imagination of your clients and customers. Mixing this new technology with Miceli Productions’ years of experience creating professional videos will expand your appeal and your image within the community.

Contact us with your idea for an aerial video, and we will work with you to develop a plan on how best to execute your vision and ensure the finished product will draw rave reviews.

Miceli Productions created this drone video for the Town of Southington.

November 22, 2016 - 9:02 am
What's a great way to let potential customers know how awesome you are? Video Testimonials. We film video testimonials...
© Copyright 2017 by Miceli Productions, LLC. All Rights Reserved.