Posted On February 5, 2015  By Jennifer Blessing Miceli  And has No Comment

Lately we’ve been doing a LOT of interviews.  People don’t like to talk on camera as a rule, So how do you get honest, interesting, and conversational interviews or testimonials from your customers? We’ve been doing it for years. We’ll share with you below some of the ways we do it. And if you have to GIVE an interview – these helpful tips for filming an interview are helpful points to know too!

1. Prep them for what you want at the start of the interview.

When filming an interview, even more so than talking on camera, people generally don’t like to be surprised. And they certainly don’t like to feel unsure about themselves. Let your subject know that you would like to have a conversation with them about their exposure to your product or your service, and that you would like to ask them about their experience.  Let them know that this will be an informal and low pressure situation in which there are no right or wrong answers. People will often feel like they must be well prepared to answer questions – especially if it’s going to be on camera. They also think they need to have everything perfect to be able to deliver an entire script worth of dialogue in one take. Assure them that this is the farthest thing from the truth and that any answer can be given any number of times if they don’t like it. It’s only a bit more interview time and in our digital world, you can do takes over and over, within reason, of course! 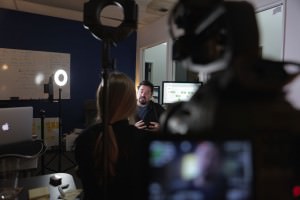 2. DON’T give them the questions you’re going to ask ahead of time.

People will tend to want to know ahead of time what you’re going to ask them. It’s best to give them general ideas of what the talking points are going to be, but also to tell them that there are no questions specifically being asked, nor any specific answers that you’re hoping they’re going to give word-for-word. The danger in providing questions ahead of time is that people will generally take the time to memorize answers to those questions. When we memorize “Lines” and then deliver them, it is very easy on camera to tell the difference. To capture natural interviews, oftentimes, memorized content appears stiff (unless you’re a trained actor). TV show hosts and other on-camera personalities work their entire careers at becoming believable and approachable on-camera even while reciting memorized lines.  Viewers will be able to tell the difference between memorized answers and those that are given in the moment honestly and conversationally.

Your subject will tend to feel like they’re sitting on the other side of the interrogation table at the local police station when they first sit down with you. Recognize that. Your first job is to make them as comfortable as possible. Taking an extra 5-, 10- or 15 minutes before you begin filming to make conversation, small talk, and asking them questions about their day and their job, will yield fantastic results once the cameras do begin rolling. Take this time to assure them once again that anything they don’t like, they can simply stop and start saying again in a different way. Remind them, when possible, to use complete thoughts, complete sentences, and to relax and smile. Allowing someone to smile – giving them permission to smile – puts a person’s entire body and mind in a different place than when they first arrive. During interviews on camera, people tend to assume that they need to be serious, professional, staid, and boring when in reality we want the most human, personable, and honest moments we can get for testimonials. We all understand as human beings that we have emotions, and therefore, we believe in others who show emotions as well. Lack of emotion tends to make us wary and suspicious of why there’s a lack of emotion.

The key to getting great testimonials and interviews is to converse with your subject while staying as far out of it as you possibly can. This may seem like an oxymoron and it can be the most difficult thing to master. While people don’t like talking in front of cameras, and they hate the thought of memorizing lines, people in general really do like to converse with other people. Given the opportunity, most people will actually talk your ear off. What happens when the camera starts rolling, however, is performance anxiety kicks in, and people who are usually friendly and conversational become clammy and choked up having difficulty even pronouncing their own name at times. So you start a conversation. And instead of asking the question to which they have to formulate an answer, you just begin to talk. A dialogue, in which they can participate, no longer makes them feels as if they are they the sole performer for the camera, in which they feel they must be perfect or else fail. Rather they are now simply a human being sharing a moment with another human being. The next step is then the hardest – finding ways to not share in the conversation so as to allow them to do most of the talking. We have to know what we want out of the conversation before it begins. If I’m looking for a testimonial about my service-based company, I probably want to hear about how my service went above and beyond, was timely, affordable, and how I have a great personality to boot. Conversation openers need to lead the subject toward talking about these items. If I simply ask the question,”was my service satisfactory?, I’ll undoubtedly get the answer, “yes”.  So instead, start the conversation with, “you needed my service and found my company online. With so many people offering my service, tell me how my company handled your needs.”

Listen. Then LISTEN. Then REALLY LISTEN. When you really listen to someone, you naturally find more to ask them about. The art of the interview is rooted in becoming completely 100% interested in the experience that your subject has had. This person knows more about what you’re asking them to discuss then they themselves know, and feels more about the experience than they ever imagined. So once they begin to discuss it, listen, and find the moments to ask them to tell you more. Once they tell you how great your product is, ask them to tell you how it impacted their life. Once they tell you that it saves them so much time and they really appreciate that, ask them to describe what they do with that newfound free time. Once they tell you how it affords them time with their family that they didn’t have before, you’ve struck gold.  Much like mining, however, gold is not usually very close to the surface. There’ll be many layers to the story and only by listening to what they have to say, and asking your way to deeper thoughts, will you find the riches. Once you have found your way to the important bits, you can usually follow the vein to more great content as well. Keep remembering that it’s more important to listen than to be thinking about the next question.  The late-night TV show host seems to have an unending list of questions to ask the moment there is the slightest pause in conversation, but this approach will not yield the best answers for video testimonials and interviews. Once your subject starts talking about the important parts of your conversation, let them continue until they’re done. And then, pause and let them think. You will often find that they’ll begin again taking the next logical step themselves in the conversation. You’ll know when they become uncomfortable and have nothing left to say about that subject. It’s then that you’ve hopefully made a mental note about what you wanted to guide them to next.

An example of an interview from Miceli Productions:

These tips can help you focus your interviews and testimonials to get the best video content from your subjects when you’re going the DIY (do-it-yourself) or in-house video route.  When you need more advanced tools and techniques, call Miceli Productions.  We’ll kick it up to the next level. Read our post on Using Video for Business: Finding and choosing a great production company.

Filming a music video. It's about creating an environment. 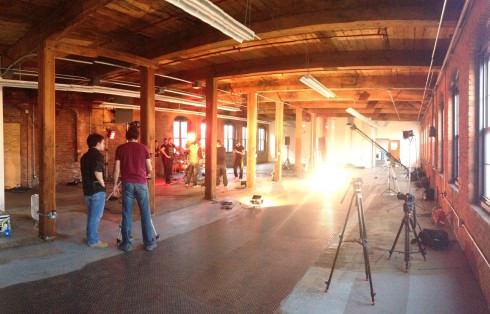 Filming a music video. It's about creating an environment.